A downloadable game for Windows and macOS

There are 3 secrets hidden within this chapter, two of them are secret endings and the third is a mystery. Can you find them all?

Symbiotic is a sci-fi action drama with dark undertones, and a love story the likes of which will be a roller coaster of emotions.  As Zaydin and company go through the rigorous training to master the use of their symbiote partners, they must overcome numerous obstacles and fight enemies far beyond their control, all while dealing with their emotional state as they mature. The race is on for the survival of mankind in this grueling war with another world!

Zaydin is a young complicated kid trying to cope with the loss of his mother, an evil entity attempting to control his mind, and the war of the worlds waged by the alien Symbiotes who have come to eradicate or consume all life on earth. While attending SCAR institute, the principal of the establishment, Neolinus acts as his caretaker/guardian, at the request of Zaydin’s mother. Neolinus is seen as a figure to the young orphan. Elliosa and Kadin, the friends he never wanted, have extremely different views on Zayden. Elliosa has a major crush on him, and Kadin being the protective big brother type (Even though they’re not related), sees him as a dangerous jerk. They are joined by their symbiote partners, Tama who belongs to Zaydin, Pinkie Elliosa’s loveable friend, and Spike the “tough guy” belonging to Kadin. Together with the rest of the school they will discover what it means to be at war, not only with the aliens but also with their own emotions.

This Visual Novel will be based around a system of Chapters and Seasons.  All chapters within the first season would be free to play once you have bought the game, and those chapters have been released.  The following seasons would be purchasable DLC due to the size and amount of content within each season.  The first chapter of the next season would be freely playable, so that cliff hanger endings are partially resolved if you decide not to buy the next season. Chapters in the seasons come out when they’re finished, so you don’t have wait for the season to be finished to continue the story.

The first season begins with introductions of the wide cast of characters, and the main protagonist, Zaydin, being rebellious towards SCAR Institute and his caretaker, Principal Neolinus. Zaydin must deal with his emotions, repressed memories, relationship with Elliosa, rivalry with Kadin, and a dark evil presence lingering in his mind as he goes through this advanced high-school setting. The war that wages between Earth and the symbiote planet Metamor threatens to destroy everything, and forces the children of Earth to rise up and protect the planet against these monstrous being. As you progress through the Visual Novel you will be sent on required (and some optional) missions to kill the Sym-Monsters sent to Earth from Metamor. Zaydin’s ego and bad temper constantly get him into trouble, whether it’s his caretaker/principal, the Class S president Alastair, or even his own “friends”, Zaydin acts out and antagonizes everyone around him… but is he doing it because he’s a bully, or for some other reason?

As you progress through the story and missions you will be given a choice that decides whether you will be punished like a villain or hailed as a hero. In missions you can fight Sym-Monsters and save Civilians. It is required that you fight and kill a certain number of Sym-Monsters, however it is NOT required that you save the civilians, this gives way to a moral dilemma… do you save everyone like a true hero? Or do you let them all walk into the fates they would have endured had you never even arrived? Doing either of these to an extreme degree may result in a secret ending as well as changing the game later down the line, opening dialog trees, recruiting allies, or causing you to encounter something truly terrible…

"A kinetic novel is a linear type of visual novel where no narrative or gameplay choices typical to the latter are presented."

Symbiotic is more akin to a Kinetic Novel then a traditional Visual Novel, since the game is more linear and the ending is the same regardless of what you ultimately decide to do; however, it is possible to change the difficulty of the game and dialog of the ending based on your decisions. As mentioned above you can get a Psychopath or Savior ending in every chapter of the game. With this comes new challenges, allies, or dialog trees you wouldn’t see otherwise. The new allies can replace party members in missions allowing you to customize how you play through the missions. The challenges come in the form of unique enemies that are angry and vengeful towards Zaydin and co. for not preventing this from happening.

With All Thanks to the Creator of the Game!!!

Hey, thanks for the gameplay video!  I really appreciate it! 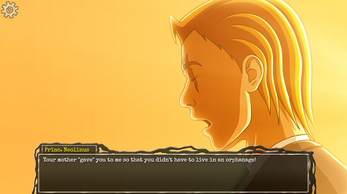 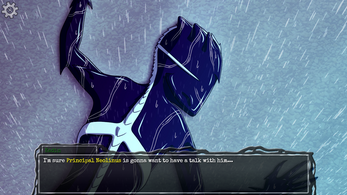 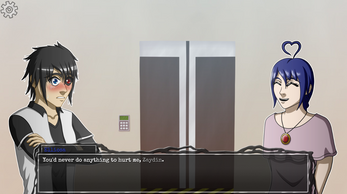